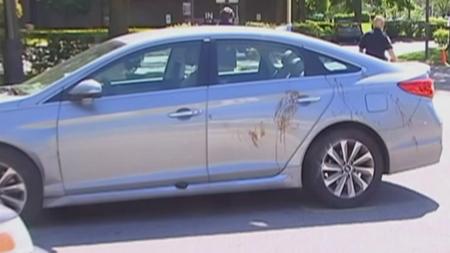 A teenage girl from Chicago who has been charged with killing an Uber driver randomly attacked the man with a knife and a machete that she had just stolen from Walmart, authorities say.

Eliza Wasni, 16, kept her eyes mostly to the floor Wednesday afternoon as a Cook County judge ordered her held without bail in the killing of Grant Nelson of Wilmette — an act prosecutors called “heinous” and “not provoked in any manner.”

Prosecutors said Nelson, 34, had picked up Wasni early Tuesday a few blocks from a Walmart in Skokie and, minutes into the ride, near the corner of Touhy and Lincoln avenues in Lincolnwood, she began stabbing him.

He managed to pull over his Hyundai and run to a nearby condominium building lobby, where he pushed buzzers and yelled, “Help me, help me. I’m going to die,” Assistant State’s Attorney Michelle Cunningham said.

Police were able to use the Uber app on his phone to see that “Eliza” was the name of his most recent customer, the prosecutor said.

She called Nelson a “random victim.”

Nelson, who attended New Trier High School in Winnetka and the University of Colorado at Boulder, described his attacker to police but died later at a nearby hospital, officials said.

Surveillance footage from Walmart showed Wasni walking around the store with a knife and machete and then leaving without paying for them, the prosecutor said.

She said Wasni had taken two earlier Uber rides the evening before, including one to Des Plaines and another from Des Plaines to Walmart. She was apparently in violation of the ride-sharing company’s terms and conditions, which say customers must be at least 18 years old.

Wasni spoke during the bond court hearing only to confirm her name. Her lawyer, a public defender, said the teen attends Taft High School in Chicago and lives with a single mother.

Wasni has been charged as an adult with first-degree murder. Judge Michael Hood ordered her to be held without bail and called the crime “extremely violent.”

An official with the Cook County sheriff’s office said Wasni will be held in a juvenile facility.

Outside the courtroom, Nelson’s brother, Todd Nelson, called him “the most gentle, kind person. He never hurt anyone. He was good to animals, he was good to children.”

Grant Nelson, his brother said, loved opera and classical piano and was a “very good” piano player. He had also previously worked at Di Pescara restaurant in Northbrook, a manager there confirmed.

“He was just trying to do the best he could in life,” Todd Nelson said.

His sister, Alexandra Nelson, added that the family hopes “justice will happen,” calling the attack “horrifying and maddening.”

The siblings, as well as their parents, were in the courtroom during the hearing. Alexandra Nelson sat behind her father with her hand on his shoulder as a description of the alleged crime was read by the prosecutor.

Family members sobbed at times during the proceedings, including when officials described Grant Nelson begging for help in the lobby before he was found on the ground outside in a pool of blood with multiple stab wounds on his right side.

An Uber spokeswoman issued a statement Wednesday saying the company is “heartbroken by the loss of one of our partners, Grant Nelson. Our deepest sympathies and prayers are with his family and loved ones during this incredibly difficult time.”

Regarding the company’s 18-and-older age restriction for customers, the spokeswoman later explained that a rider’s access to the service can be removed if the rider is found to be underage, and that there is a mechanism for drivers to report riders if they suspect them of being younger than 18.

The spokeswoman said Uber has safety tips for drivers and riders, developed with the assistance of law enforcement agencies. She also said that drivers are encouraged to contact local authorities if they ever feel unsafe, and that the app has a two-way feedback system that is monitored around the clock by a team that investigates any problems that are reported.