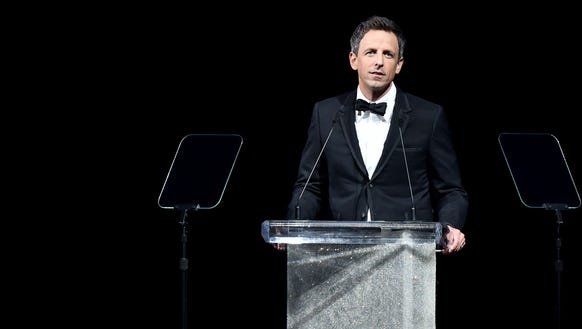 Despite his reputation for cracking down on the Trump administration, Seth Meyers mostly stuck to a politics-free monologue at Monday’s Council of Fashion Designers of America (CFDA) Awards, where he served as host.

But in-between the jokes about romphims and Balenciaga’s Ikea bag at the New York City gala, known as “fashion’s Oscars” for its high-wattage attendees, the Late Night host included some style-related Trump content in his opening speech, to mixed results from the audience.

“Abercrombie & Fitch has announced it’s putting itself up for sale. Meanwhile, thanks to Donald Trump, the United States has become a Banana Republic,” he said, the room staying quiet.

More successful was his joke about the Trumps’ recent overseas trip. “It’s harder than ever to separate fashion from politics. First Lady Melania Trump made headlines recently after she decided not to wear a head cover while visiting Saudi Arabia,” he said. “Which was especially shocking, since her husband wears a head covering literally everywhere.”

But the crowd didn’t react as favorably to Meyers’ follow-up joke about Ivanka Trump’s Nordstrom line. “Big year for fashion designer Ivanka Trump,” he said. “I’ve heard her clothes are flying off the shelves in Nordstrom.”