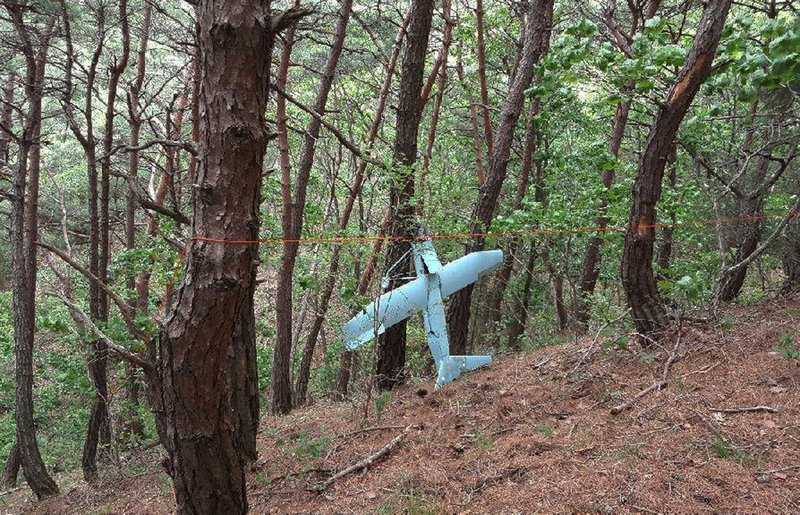 Meanwhile, South Korea’s military said a North Korean soldier walked across the heavily mined border between the countries and defected to the South. The Joint Chiefs of Staff said in a statement that the soldier was being questioned about the reasons for his defection.

The drone was found in a South Korean border town last Friday and South Korean investigators have discovered hundreds of photos in its Sony-made camera, a Defense Ministry official said, requesting anonymity because of department rules.

Ten of the photos were of U.S. missile launchers and a radar system installed in the southeastern town of Seongju earlier this year, while the rest were mostly of residential areas, agricultural fields and other less-sensitive areas in South Korea, the official said.

Under a deal with Moon’s conservative predecessor, the United States deployed key components of the so-called Terminal High-Altitude Area Defense system this spring to cope with a potential North Korean nuclear threat. North Korea called the system a provocation aimed at bolstering U.S. military hegemony in the region. China also opposes the deployment because it worries that THAAD’s powerful radar system can peer into its own territory.

The drone was believed to have crashed because it ran short of fuel while returning to North Korea. The official said more analysis was being conducted, including trying to determine if the drone had already transmitted the 10 photos of the THAAD site.

North Korea has touted its drone program in recent years, and South Korean officials believe its military has about 300 drones. In 2014, several suspected North Korean drones were found south of the border. Experts said they were low-tech but could be considered a potential security threat.

The drone found last week has twin engines and flew farther than those discovered in 2014, which had single engines, the Defense Ministry said, suggesting that North Korea is pushing to upgrade its drone arsenal.

South Korean officials said the drones found in 2014 also were equipped with Japanese-made cameras and photographed South Korea’s presidential Blue House and other areas. Those drones were unable to transmit photos in real time, investigators concluded.