Turned off by high-priced massage devices, some professionals are turning to basic power tools; ‘nice sort of vibration’

Randy Fruchter says the exchange has happened a few times. He leans over a man lying prone on his massage table and turns on a buzzing, hand-held device. 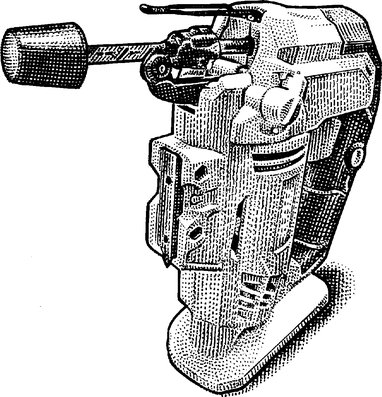 A jigsaw with rubber stopper

“Hey, that sounds like a jigsaw,” the client says.

“Actually,” Mr. Fruchter replies, “it is a jigsaw.”

A year ago, the massage specialist in Orange County, Calif., balked at the $3,500 price of a massage device. Instead, Mr. Fruchter bought a $100 cordless jigsaw, filed down the blade and covered the point with a hard-rubber stopper. He uses the device daily to work on painful hips and stiff upper backs.

“In five minutes I can get about 30 minutes of work done,” Mr. Fruchter says.

The popularity of massage is rising along with the price of electric gadgets for it. So some do-it-yourself-ers are raiding garages and Home Depot and turning power tools into turbocharged robo-masseurs. 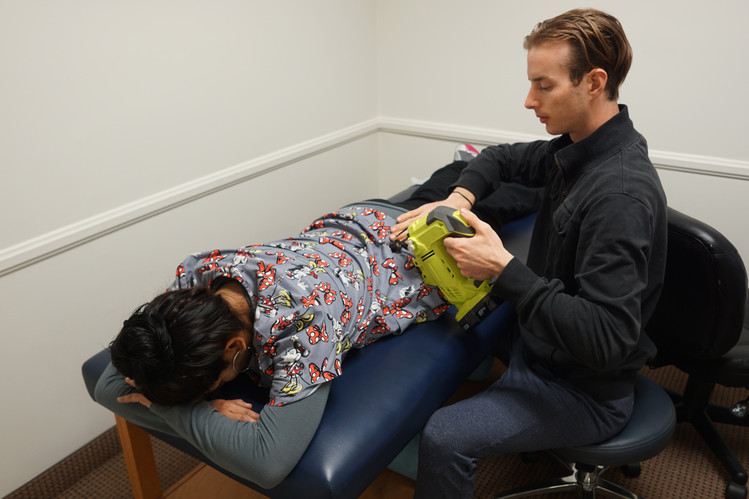 Bill De Longis, head strength coach at Trinity College in Hartford, Conn., uses a jigsaw—with a lacrosse ball pierced and epoxied to its business end—for limbering the limbs of the school’s varsity athletes. He calls it his “jig-sawge.” He opted to hack the $60 saw after seeing a similar massage tool priced at $600.

“I’m at a Division III school, so we don’t have a lot of money to spend on luxury items like that,” Mr. De Longis says.

The coach also has appropriated an orbital sander (with sandpaper removed) and a battery-powered car buffer, which Trinity’s baseball pitchers and women’s lacrosse team use to warm up.

Using power tools for massage seems to have originated among weightlifters and other serious athletes. The idea spread on social media, and now power tools can be found everywhere from chiropractors’ offices to tie-dyed campouts.

“When they come out of it, they’re almost in this really blissful state,” says Ms. Han, adding that the massages will return for this year’s festival, which starts June 22. 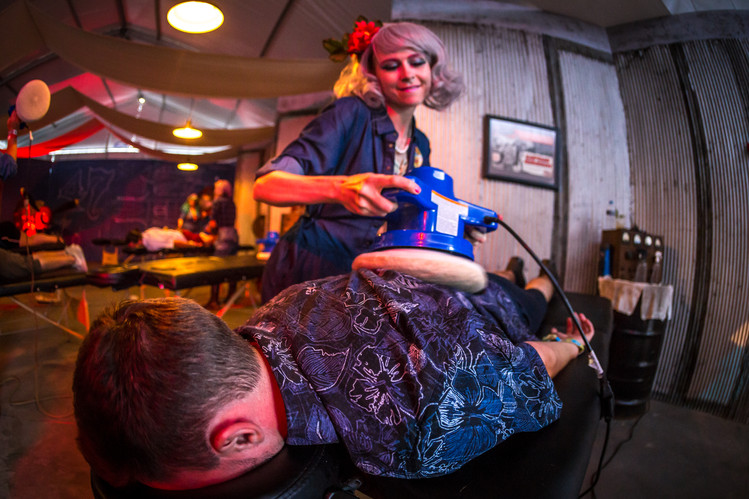 Tod Whitfield, a retired Toronto police detective, was so intrigued by his CrossFit gym’s car-buffer massager that he experimented on his body’s sore spots with a half-dozen tools in his home machine shop. The most effective, he reports, is a pneumatic-powered sander whose scratchy surface he replaced with a lamb’s wool bonnet.

“The pad spins in a circular motion, but the shaft also spins on its own axis, which gives you this dual action,” says Mr. Whitfield, who has used the sander on an aching shoulder and hip. “It gives this nice sort of vibration.”

A spokesman for Clarence, N.Y.,-based Dynabrade, maker of Mr. Whitfield’s sander, was surprised to hear of someone massaging himself with company products, some of which are used in industrial finishing for tractors and motorcycles.

“Some of our orbital sanders, they’re around 12,000 rpm,” Dynabrade’s Ron Veiders says. “It could cause abrasions or whatnot, or even contusions. It wouldn’t be something I would encourage.”

Peter Roberts, coach and owner of Quantum CrossFit, where Mr. Whitfield first saw car-buffer massage, says the buffer is especially effective on the lower body, including inner-thigh muscles. “But if you accidentally hit your testicle, it doesn’t feel great,” he says. “I’ll just say that.”

Kyra Williams, a personal trainer and powerlifting coach based in Tampa, Fla., uses a car buffer regularly since a friend introduced her to the idea. “I thought it was a little odd, but she brought it into the gym and other people were going crazy about how great it felt,” she says. “So I figured I’d give it a shot, and it feels pretty awesome.”

Power tools can be part of a team’s warm up, says Michael Rehfeldt, the University of Cincinnati men’s basketball team’s director of strength and conditioning. He has four Black & Decker Random Orbit Waxer/Polishers for use before games.

“It’s good for increasing blood circulation and almost has a numbing effect, almost like a massager,” he says. “It heats up the muscle and creates blood flow.”

Tim Perra, vice president of public affairs for Stanley Black & Decker, says, “We do not condone, approve or recommend that our tools be used for any application beyond those for which the tool was designed and intended.”

Take a Look at Other Recent A-Heds

Kelly Starrett, a coach, physical therapist and author, recalls topping a reciprocating saw with a lacrosse ball years ago but said the contraption was too intense for massage. The San Francisco gym founded by Mr. Starrett and his wife, Juliet, also has an industrial buffer/polisher for human use.

“We call it ‘informed freestyling,’” Mr. Starrett says. “The number of things I have tried to use off-label in order to improve human performance is considerable.”

Mr. Starrett also is a founding owner of TimTam, a deep-tissue massager company that launched last year. The $400 device was created from a jigsaw mold, according to Tom Pepe, managing director of TT Therapeutics, which owns TimTam.

Power tool-massage fans boast of their devices’ versatility. Last year Mr. De Longis at Trinity College reinstalled the blade on his jigsaw massager and used it to saw wood for boxes he built for doing squat exercises. Another of his retooled massagers also does double duty.

“I intend to buff my car with it this summer,” he says.

Write to Rachel Bachman at rachel.bachman@wsj.com