The directions to the rural North Texas home of Jim Marrs, an author and conspiracy researcher, certainly sound like something from an old episode of “The X-Files”: “Go north about seven miles, and watch for a sign on a green metal gate at the top of a steep hill.” 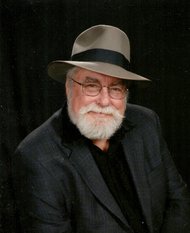 A book by Jim Marrs, a former journalist, deals with theories about space-alien overlords and a “global elite” in on the secret.

Cultural coverage for the Texas Report is provided by

A second sign, which reads “Posted: No Trespassing” and is attached to a rickety picket gate, only heightens the mystery. Are clandestine alien autopsies or chemical warfare experiments being carried out on the grounds of this expansive property?

But then you pass through the gate and drive up a small gravel path. Mr. Marrs, 69, is standing outside the door of his custom-built house, as white-bearded and welcoming as Santa Claus. Inside, Mr. Marrs’s wife, Carol, is preparing a lunch of mango chicken salad sandwiches and vegetable frittatas. Other than a Marvin the Martian lawn figurine, there is nothing even remotely otherworldly about the place.

“I pay my taxes. I go to church. I live my normal life,” Mr. Marrs said. “And I don’t make wild claims that are unsubstantiated.”

Mr. Marrs’s interest in the information the government and news media may or may not be keeping secret dates back to his career in newspaper journalism, as a police reporter for The Fort Worth Star-Telegram in the 1970s and as a publisher of his own weekly newspaper in the 1980s.

“The newspapers self-censor because they have to; otherwise they would lose advertisers and wouldn’t exist,” he said.

As an author, though, Mr. Marrs has carved a curious niche for himself. He may be the only conspiracy writer in the United States whose work is regularly published by a major house, HarperCollins — part of the very mainstream media, in other words, that Mr. Marrs often accuses of hiding the truth from the public.

His latest book, “Our Occulted History: Do the Global Elite Conceal Ancient Aliens?,” arrived in stores on Tuesday.

The fit has not always been an easy one. His first book, “Crossfire: The Plot That Killed Kennedy,” was rejected by some 25 publishers before the independent Carroll & Graf, now defunct, published it in 1989. That book became a best seller, as well as one of the sources for Oliver Stone’s 1991 film “J.F.K.”

But a contract that Mr. Marrs had for a subsequent book on the psychic phenomenon known as “remote viewing” was canceled by Harmony Books, a division of Random House, in the early 1990s, just before its planned release.

And although he has published five volumes with HarperCollins and its William Morrow imprint — including “Alien Agenda: Investigating the Extraterrestrial Presence Among Us” (1997) and “The Rise of the Fourth Reich: The Secret Societies That Threaten to Take Over America” (2008) — a book he was contracted to write about 9/11 conspiracies was canceled in 2002.

“The only explanation was that they didn’t want to offend the families of the victims,” Mr. Marrs said. The author also said that his personal publicity had declined in recent years.

“If they had their druthers, they’d rather not publish me at all,” he said. “But they haven’t figured out how to explain why they won’t keep publishing this guy who’s made them all this money.”

Henry Ferris, a vice president and executive editor at William Morrow, who edits Mr. Marrs, disputed those characterizations, and said, “We publish books for people who want to read them, on all kinds of subjects.”

Mr. Marrs’s newest book, “Our Occulted History,” is a consideration of the possibility that both the Darwinists and the creationists have it wrong, and that modern man might have actually been bred by “space-faring overlords” from the planet Nibiru. The Nibiruians, in Mr. Marrs’s interpretation, may still be exerting their influence over Earth by controlling “a small group of international yet interconnected individuals” who run the financial and news media industries.

Mr. Marrs speaks with a genial drawl that sounds nothing like the frenzied paranoia that is traditionally associated with conspiracy theory. Nor does he necessarily believe that some of the more far-fetched-sounding ideas explored in “Our Occulted History” are absolute truth. Instead, he sees himself journalistically reporting on all sides of an argument.

“His books are incredibly well researched,” said Mike Adams, the founder of Natural News, a journalism Web site that encourages “informed skepticism.” “If you follow the citations, he backs it all up,”

Still, Mr. Adams wonders whether Mr. Marrs — whose work goes through an extensive vetting process at his publisher — might ultimately be better served by venturing out on his own.

“I think what we’re getting is the watered-down version of Jim Marrs,” Mr. Adams said. “I can only imagine what it would be if he were self-published.”

Mr. Marrs is more practical about the idea of self-publishing. In this age of countless Web sites and e-books all clamoring for attention, he believes a traditional publisher still offers him the best chance to get his work noticed and read. His works continue to sell successfully, and provided he steers clear of certain raw-nerve topics he is confident he will be able to keep doing what he does.

“It’s just real frustrating being the one-eyed man in the land of the blind,” he said.